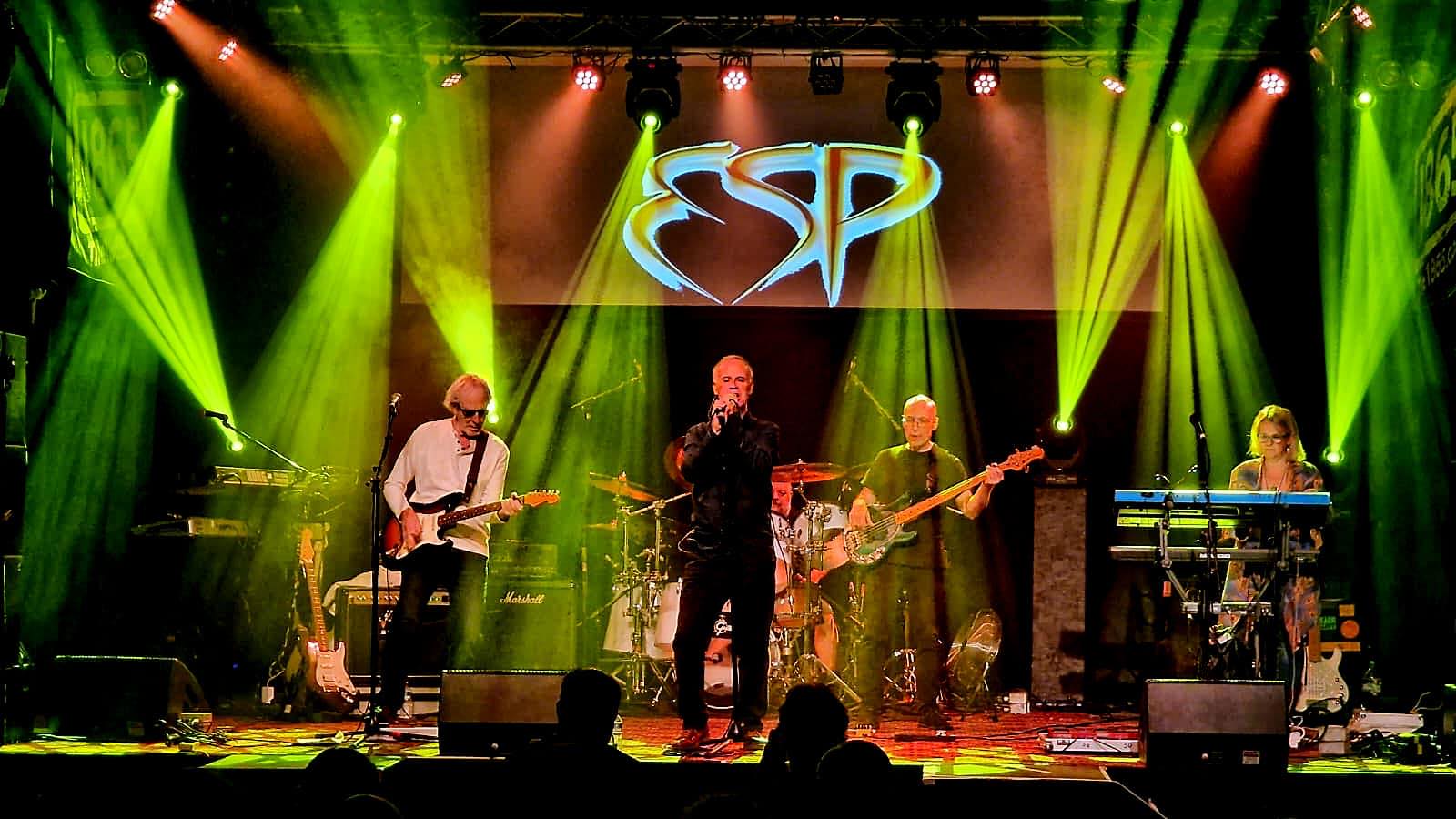 The Half Moon Putney, The Northcourt, The 1865 –  ENTS tickets 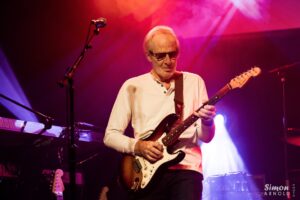 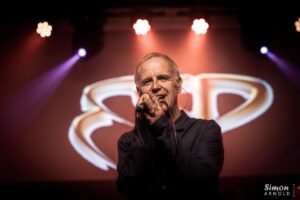 Many thanks to Gary Mackenzie and PROG Magazine for this review of ESP at the Half Moon, Putney “Despite now having six albums, ESP chose to focus on just two of them here with three tracks from 22 Layers of Sunlight and the entirety of latest release Anarchic Curves. As founder and guitarist Tony Lowe explains later, this is largely due to their conceptual and thematic connections.

Launching into a short suite from 22 Layers… it’s clear that ESP are on excellent form tonight, and a couple of technical issues can’t detract from what is a display of sophisticated, evocative and characterful music played pretty flawlessly. With the ambitious complete airing of Anarchic Curves there are plenty of lovely moments – the brief melodic guitar solo in Invisible Ricochets and the great drum and bass grove in The Dead Dark of Lollipops, for instance.

However, it’s frontman Peter Coyle who provides the visual focus – popping angular poses, dropping to his knees, praising the heavens, miming lyrics even when he isn’t supposed to be singin

g, becoming completely immersed in the movement and flow of the music – it’s quite enthralling. 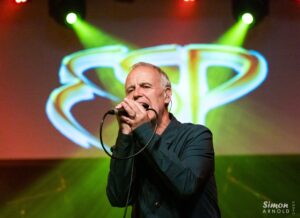 Although ESP have big songs and hooks, their USP is more about mood and texture and they absolutely nail both tonight.”
******************************
Thank you to Gareth from Prog Blog for his review – **GIG REVIEW**
Landmarq and ESP Project, a prog double-header, Half Moon, Putney, 14th July 2022
“London-based Landmarq have been around since 1990 and have released 10 albums but this was the first time I’d seen and heard them. Their sound is neo-prog, reflecting the backgrounds of the original members, even though the band’s line-up has changed a few times since they originally formed. Currently comprised of Andy Allen (drums), Wolf Campen (vocals), Uwe D’rose (guitar), Steve Gee (bass) and Mike Varty (keyboards), they performed an impressive and enjoyable set largely taken from 2012’s Entertaining Angels. I must confess to an admiration for Campen’s hat – decorated in Jackson Pollock-style using psychedelic colours.
I bought this double album on vinyl from the merchandise stall and bumped into Chris Topham (Mr Plane Groovy) on my way out, who introduced himself by saying that the LP was on his label!
The music by the different incarnations of Tony Lowe’s ESP Project varies between full-on symphonic prog and post-rock. Beginning with the first three tracks from 22 Layers of Sunlight, the gig was really to promote Anarchic Curves, released earlier this year. A few early minor technical problems can’t have helped Cheryl Stringall settle into her role as keyboard player, but these appeared to have been resolved by the track 22 Layers of Sunlight, and from then on it was perfectly executed. With a string of references to key progressive rock bands and lyrics, Peter Coyle seems to have captured the essence of my youth, though he also gets up-to-date with references to Killing Eve. The words were delivered in a highly animated fashion which went a long way to make up for the loss of layered musical subtleties of the CD – a key part of ESP’s USP. A great evening, including the discovery of a long-running band!”
******************************
The Northcourt – Thank you to Rob Fisher for this review! “A few fuzzy shots (not included) from last night’s scintillating ESP performance at Music at The Northcourt. Wow. What an enthralling experience. Peter Coyle was absolutely electric, bringing intense drama and energy to the music. Tony Lowe was majestic, dare I say Rutherford-esque in the channelling of passion and power on guitar. Cheryl Stringall was magnificent on keys, focused, precise yet delightfully expressive. Pete Clark’s bass was a true demonstration of just how bass lines weave and entwine around all aspects of alive performance. And Dave Etheridge on drums was absolutely exemplary in the way his pulsating rhythms provided the fizzing foundations for the most beautiful, melodic landscapes.
Kudos to Mark Cunningham for booking two excellent bands and for all the work being done at the Northcourt. 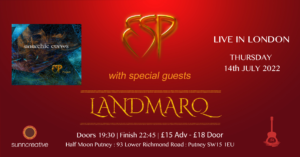 They have one date left on their tour – Southampton, tomorrow night. Please – go! It’s a hell of ride and well, well worth seeing them live.”
Thank you to Simon Arnold for his pictures of ESP at the 1865 in Southampton – Large banner image – Wolf Campen

“To experience the soaring, experimental, epic musical investigations of their new album

Though ESP has had a wide-ranging cast of musicians in its brief history, Tony Lowe still manages to skilfully steer the band ever onwards and upwards. This gig, with an acoustic duo incarnation of Hats Off Gentlemen It’s Adequate providing the support slot, was to promote the launch of the latest ESP Project release The Rising. I’d urged prog fans to get to see ESP after the performance marking the launch of their debut, Invisible Din in November 2016, highlighting them as new standard-bearers for 21st century symphonic prog; three full-length albums and one EP in, I stand by my words. Though 2018’s 22 Layers of Sunlight deviates from full-on symphonic with a post-rock feel, the writing, execution and production all remain first-class and this is retained through the EP Three and The Rising, two releases with a stabilised line-up. The show include 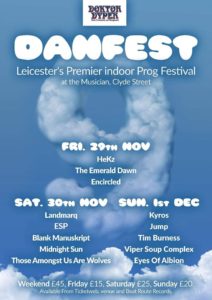 d material from all ESP releases and was warmly received. Consummate professionals, th 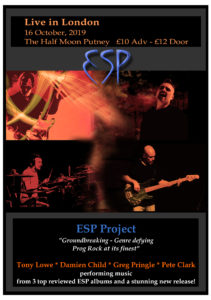 e performance was delivered almost perfectly – a brief interlude was required to reboot a patch, allowing Damien Child time to interact with the audience and there was a degree of lack of Child’s vocal clarity when the musicians were in full flow. As much as I like the Half Moon, I suspect that a more forgiving space would better suit the cinematic nature of their material, but I’m aware of at least two converts present on the night who had never previously heard the band